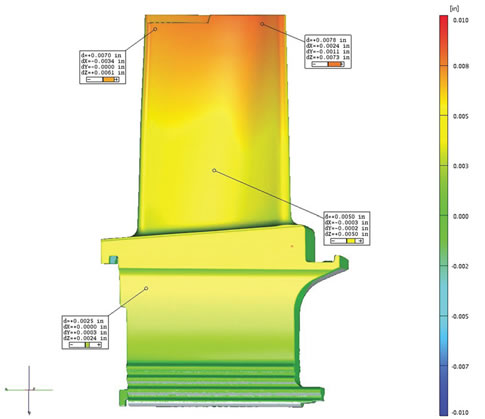 Today’s challenges in the turbine industry to meet the ever growing requirement to manufacture parts faster, on schedule, and at reduced costs, have made it apparent to industry experts that traditional inspection methods are too slow and inadequate to achieve the required results. With the increasing complexity of air foils, nozzles, and impellers, simple methods of inspection are no longer acceptable. To overcome these challenges, casting and forging companies are now turning to digital inspection using automation. Until recently the accuracy demand within the power generation industry precluded the use of such data collection devices. Now, with the release of the ATOS II and ATOS III measurement systems, both the accuracy and automation needs have been addressed.

These optical white-light 3-D scanners from Capture 3D are flexible optical measuring machines based on the principle of triangulation. Fringe patterns are projected onto the device being measured and then observed with two cameras. The 3-D coordinates for each camera pixel are calculated with high precision, and a polygon mesh of the object’s surface is generated. The high performance, detail resolution, and broad selection of measuring areas allows efficient and precise data gathering and reporting in a variety of applications.

Casting companies using the ATOS scanners in conjunction with an automated turn table are able to inspect 70 or more parts in an eight-hour shift. These inspections are not traditional by any means; they include airfoil contours, leading and trailing edges, root, and tip geometry. The data is collected and processed using macros in just minutes per part. A report is generated that includes color contour plots showing deviations from CAD to the as-built condition; “go, no go” locations, cross sectional data, and traditional XYZ inspection locations as with traditional coordinate measuring machines as seen in figures 3 and 4. 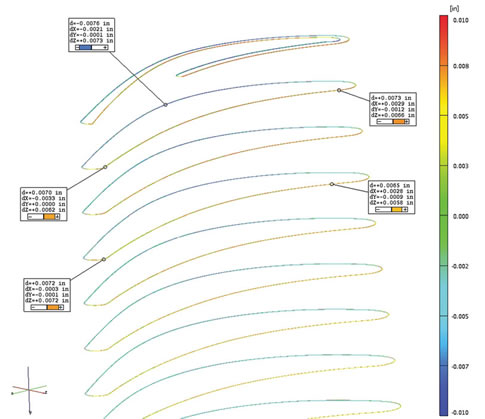 For nozzle assembly applications, it is critical to measure the entire assembly to find the minimum distance between the trailing edge of each vane and the face of the adjacent vane. This information is used to determine the throat area which, in turn, is used to calculate the total airflow volume through the engine, as shown in figures 5 and 6. This information is directly correlated to engine efficiency.

First, the part is loaded into a fixture frame with premeasured reference points, as shown in figure 7. Next, a macro is executed, which defines file directory, part name, what data to process, and initiates the scan process. The system automatically generates inspection reports that have been predefined to meet the requirements of the specific components. Because many different part sizes are scanned on a daily basis, different size reference frames are produced and measured with a Capture 3D photogrammetry product, the TRITOP, to provide optimal results. In some cases, special fixtures have been designed to hold up to four parts, thus further speeding up inspection times. With this multiple part inspection, quality assurance departments are able to acquire XYZ inspection locations, airfoil contours, root, and tip geometry.

Since forging and casting companies have started using the ATOS II and III scanners, they have seen a decrease in the time needed for part inspections, thus increasing the throughput within the quality departments. For example, in the past using traditional inspection methods on a production run, parts were inspected while capturing only 16 key points. Now by using the ATOS scanner, parts are inspected capturing 85 percent of the entire blade and 100 percent of the relevant areas. With the ability to provide a more thorough inspection, companies are able to identify problems such as trends in part shrinkage, airfoil twist, and mold wear. With this newly available information, manufactures are able to change molds more quickly and in some cases cut new part implementation times in half.

Oil Spill Survey, First – of – its – Kind with Drone

This site uses Akismet to reduce spam. Learn how your comment data is processed.