How Does 3D Laser Scanning Work? 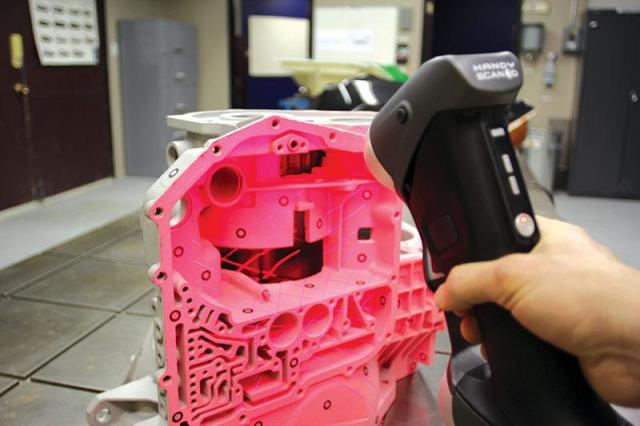 It’s easy to take our tools for granted, especially the ones we use regularly.
Whether you’re spending all day writing G-code for a 5-axis mill or operating a coordinate measuring machine, it’s worth pausing every now and then to appreciate how these complex yet vital tools actually work. Plus, it never hurts to brush up on the basics.

How Does 3D Laser Scanning Work?
At the most basic level, laser scanning involves a combination of controlled steering of laser beams and distance measurements. A rotary encoder controls the scanning motion by adjusting multiple scanning mirrors to guide the beams.

Positioning the laser beam in two dimensions requires either rotating a single mirror along two axes or, for faster scanning, reflecting the beam onto two closely spaced mirrors mounted on orthogonal axes. The lasers can also be positioned in three dimensions via a servo-controlled lens system known as a focus- or Z-shifter.

Single scans are generally not sufficient to produce a complete model of the subject and so multiple scans must be brought together into a common reference system through a process known as alignment or registration.

Time-of-Flight
One of the central concepts in laser scanning is time-of-flight. This refers to the use of a laser range-finder to time the round trip of a light pulse travelling from the scanner to the object and back again.

Since the speed of light is a known constant, the distance between the scanner and the object can be calculated by measuring the time it takes for the light pulse to return to the scanner. Thus, the formula for calculating distance based on time-of-flight is simply:

As a consequence, the accuracy of a time-of-flight sensor depends on the accuracy of the laser scanner’s chronometer.
The main advantage of this technique is its long-distance capability, which is why some time-of-flight scanners are used for large-scale surveying projects. However, accurately measuring a quantity as miniscule as the time it takes for a pulse of light to make a round trip in a quality lab is difficult. That’s why time-of-flight sensors alone are insufficient for applications requiring high-accuracy measurements.

Triangulation
Many handheld scanners use triangulation to off-set the diminished accuracy that comes with time-of-flight measurements.

For example, handheld laser scanners often incorporate a camera that tracks the laser dots projected onto scanned subjects. This enables the scanners to triangulate the distance of the subjects much more accurately than with time-of-flight measurements alone. However, although triangulation enables higher accuracy, it also limits the effective range of the scanner.

Point Clouds and Registration
In the most basic terms, a point cloud refers to a set of data points in a coordinate system.

In the standard Cartesian coordinate system, points are defined in terms of X, Y and Z coordinates. In the context of 3D scanning, point clouds represent the results of a scan as unstructured three-dimensional data.

The typical file formats of point clouds are TXT, IGS and ASCII.

Point cloud data is then brought into a common reference system where the data is merged into a complete model via the process of alignment or registration. This process can occur during the scan itself (in the case of high-end 3D scanners) or as a post-processing step.
The resulting data can be processed further using software to clean up aberrations or fill in gaps in the data points, creating a triangle mesh or polygonal model and exported as an STL (Stereolithography or Standard Tessellation Language) file or converted to a Non-Uniform Rational B-Spline (NURBS) for use in a CAD model.

Typical formats for a triangle mesh are STL, OBJ and SAT.

Oil Spill Survey, First – of – its – Kind with Drone

This site uses Akismet to reduce spam. Learn how your comment data is processed.